My laboratory has established methods to investigate laminar circuits and the role of feedback in motion processing in marmoset area MT. Area MT is thought to support the motion processing to guide both smooth eye movements and perception. While much is known about individual MT neurons in the macaque monkey, less is known about how information is organized across layered cortical circuits. A key advantage in the marmoset is that area MT lies on the cortical surface facilitating methods for imaging and array recordings. We have focused on recording from cortical layers with linear arrays using current source density (CSD) methods. This enables us to assign recorded cells into input, superficial, and deep layers (Fig. 3A). Consistent with my earlier work we also find a bi-modal distribution of spike duration that separates into narrow spiking (putative interneurons) and broad spiking neurons (putative excitatory cells). Area MT also receives substantial feedback projections from oculomotor areas. We have been developing viral-intersection methods that allow us to label these feedback pathways (Fig. 3B), and in the near term we are testing their efficacy for optogenetic manipulation. This suite of tools is optimized to investigate how feedback modulates sensory processing. 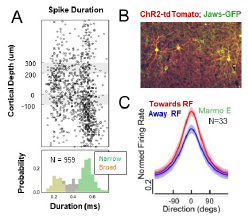 Our first investigations in area MT have focused on modulation of motion processing by pre-saccadic attention (Coop et al, pre-saccadic attention bioXriv). Each time we make an eye movement to a peripheral visual target, attention leads the movement resulting in an automatic perceptual enhancement at the target, called pre-saccadic attention. We have used the foraging paradigm (Fig. 2C) to determine how pre-saccadic attention modulates neural tuning in area MT. The task is configured so one of the foraged apertures lies within the receptive field of MT neurons under study. We compare the neural responses preceding saccade onset when the RF stimulus is the target (‘Towards RF’) as compared to when it is away from the RF (‘Away from RF’). Across the population, neurons exhibit increases both in the gain and baseline of their tuning curves (Fig. 3D). We find that the increases in gain in tuning curves support enhancements in sensitivity for motion direction, and that those changes are biased in their distribution within cortex, found mainly among broad spiking neurons in superficial layers. These studies are ongoing in a second monkey, but would show that signal enhancements underlying attention are specific to distinct classes of projection cells, while other parts of the circuit play more regulatory roles.

In future work we aim to understand what neural pathways enable saccade planning to change sensory processing in cortical circuits. Understanding how specific parts of the circuitry support enhanced perception will facilitate targeted therapies for aging and other disorders where selective attention is impaired. A leading hypothesis is that feedback projections from oculomotor areas, such as the frontal eye fields (FEF), drives signal enhancements in sensory cortex. However, there are several pathways by which oculomotor feedback could influence sensory cortex. Further, it is unclear if feedback would act directly on the neurons that show enhancements, or rather act through other classes in the cortical circuit to change its operating state so those specific classes are enhanced. Moving forward we will opto-genetically manipulate feedback projection pathways, beginning with the projections from FEF to MT, to test their role in pre-saccadic enhancement and localize the effects to different cell classes in the MT to understand the circuitry of selective attention.